Welsh Secretary Alun Cairns visited some of Pembrokeshire’s leading marine renewables tech firms today to underline his support for the sector and highlight the importance of the UK Government’s City Deal to future economic growth in the region.

The Secretary of State was joined by Alec Don, Chief Executive of the Port of Milford Haven which is leading the £76m Pembroke Dock Marine project. The project was successful in its bid for the UK Government’s City Deal funding as it seeks to create a world-leading centre for the development and testing of wave and tidal energy devices here in Pembrokeshire. The development will also extend beyond renewables creating facilities that have application for multiple blue economy industries.

Mr Cairns caught up with the progress of Marine Power System’s WaveSub and Bombora’s mWave, just two of the innovative devices being developed in Pembrokeshire which are hoped to generate clean, low cost electricity.

“The UK Government's Swansea Bay Region City Deal investment offers Pembrokeshire the chance to make a large, once in a generation investment in its own economic future. As one of the UK's leading energy ports the Milford Haven Waterway already boasts excellent infrastructure and an outstanding supply chain, with talented companies serving domestic and international clients in shipbuilding, oil and gas.

“We want this region to be in the best position possible to compete with other port-centred regions across Europe, and to be a destination of choice for the fast-growing marine renewable energy industry. The City Deal funding, alongside investment from the Port of Milford Haven and others will play a vital role in helping to attract that industry to Welsh shores.”

"Pembrokeshire is undoubtedly a wonderful place to live. Through the City Deal, the UK Government wants to make sure there are more opportunities for school leavers to benefit from local career opportunities, and to work in rewarding, skilled industries. The marine renewables industry clearly has the potential to provide those jobs of the future.”

“We are grateful for the support of the UK Government in this project. Pembroke Dock Marine has the potential to fundamentally reshape Pembrokeshire’s future, and public funding is a critical part of achieving our united goals.”

“Combined with private investment, City Deal Funding will be a rare boost in a region that is heavily reliant on so few, typically seasonal, industries as well as the nationally important fuel industry. We believe the City Deal will help create new opportunities that will secure existing jobs and create new rewarding employment for the people of Pembrokeshire.”

Pembroke Dock Marine is a £76m project to transform Pembroke Dock into marine renewable energy development and testing centre of excellence. It brings together four partners:

1. The Port of Milford Haven owned Pembroke Port will be host to the project, which will include purpose built premises and lift and launch capabilities within the existing docks.

2. ORE Catapult will lead the innovation and research elements of the project, developing a Marine Energy Engineering Centre of Excellence (MEECE) knowledge base that will help developers identify solutions.

3. Wave Hub is leading the development of an 90km2 offshore demonstration zone which will connect up to 100 megawatts of full scale renewable energy arrays.

4. Marine Energy Wales is developing a Marine Energy Test Area, a series of consented zones within the waterway for component and device testing.
The project team will also work alongside Swansea University and Pembrokeshire College to develop academic links both to enhance research and development and nurture career opportunities for future job seekers within the sector.

The Port of Milford Haven is the UK’s leading energy port and Wales’ busiest port handling around 20% of Britain’s seaborne trade in oil and gas. It is widely recognised in the industry as the energy capital of the UK.
The Port, along with the cluster of energy-related businesses along the Waterway, is a key driver of economic activity in Pembrokeshire, attracting inward investment and supporting over 4,000 jobs.

The Port of Milford Haven also owns and operates Pembroke Port and Milford Dock. Activities such as cargo handling, ferry operations, fish landing and cruise calls as well as a first class marina are spread across these two sites.

One of the most prominent on the West Coast, the Port is in the heart of the Pembrokeshire Coast National Park, the only Coastal National Park in Great Britain. It is marked as a Special Area of Conservation (SAC) and has many areas designated as Sites of Special Scientific Interest (SSSI).

The Port of Milford Haven is a trust port – an independent, commercially run organisation that has statutory responsibilities governed by its Acts, to maintain and improve navigation and the provision of Port and Harbour services and facilities. Additionally, the Port provides significant financial and in-kind support to a wide variety of local causes. All profits are retained within the business to fund these objectives. 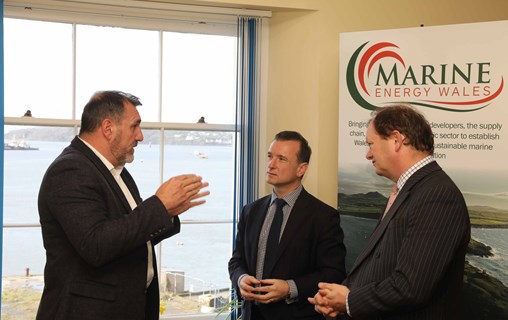