The final parts of a decommissioned oil refinery have been successfully exported to Pakistan from Pembroke Port in a six-week operation.

The former Murco refinery in Pembrokeshire closed in 2014 and during the past three years over 13,000 tonnes of cargo has been transported over the quay in seven exports to southern Asia.

Over the past couple of months, 1,690 tonnes worth of components were exported on the heavy lift vessel Regine and 1,125 tonnes on the Maria. The largest lift weighed 315 tonnes and measured 21.3m x 8.8m x 8.3m.

In addition to these heavy lift vessels, the Terra Marique barge was positioned at Gelliswick Bay to load the parts that were too large to be transported by road and taken to Pembroke Port along the Milford Haven Waterway. This was a specialist operation as sand had to be dug out of the beach, a ramp built and parts were driven onto the barge when the tide allowed.

Chris Oliver, Operations Manager at Pembroke Port, commented “The export of the refinery components from Pembroke Port ran smoothly and efficiently. We deal with a wide range of cargoes on a daily basis but this was definitely one of the larger operations in recent years. Our site is flexible in accommodating numerous sectors including breakbulk, renewables, heavy lift operations and storage with a highly experienced team on hand to deliver a safe and professional service.” 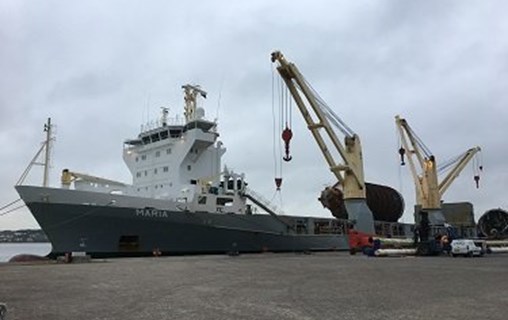