The successful testing of key components of a pioneering wave powered renewable energy technology at Pembroke Port has led to the signing of an agreement of closer collaboration between developers Marine Power Systems (MPS) and the facility’s operator, the Port of Milford Haven.

The pump that is central to the concept of a pioneering WaveSub wave energy converter was tested in an onshore tidal lagoon at Pembroke Port. The pump will form part of the quarter size prototype that is now being developed by Swansea-based MPS. The WaveSub project has been part-funded by the European Regional Development Fund through the Welsh Government, with MPS receiving a £2 million grant in October 2015.

Last week the Port of Milford Haven and Marine Power Systems signed a Memorandum of Understanding that will see deeper cooperation in WaveSub’s ongoing development. Wave energy is thought to hold great promise for delivering abundant renewable energy from the sea off the coast of Pembrokeshire and globally.

Due to the patent protected innovations of the WaveSub, it can be manufactured at commercial scale from a single facility in Wales and deployed throughout Europe.

Chief Executive of the Port of Milford Haven, Alec Don said, “Supporting companies with skills in the development of technologies and Intellectual Property is central to the Port’s strategy to promote a thriving marine renewable energy industry in the region.

“It’s great news to see Marine Power Systems go ahead with development of the WaveSub. It is just a few short months since Tidal Energy Ltd deployed their DeltaStream device, built here on the dockside, in the waters off the coast. Once again we are firmly committed to providing business support and help in kind and will be introducing MPS to some of the highly skilled companies the local supply chain can undoubtedly provide.”

Dr Gareth Stockman, co-founder and managing director of Marine Power Systems, said, “Marine Power Systems is hugely grateful to the Port of Milford Haven for its support. It has recently helped with the deployment and installation of the pump and it is great to know that they will be able to provide further assistance whilst manufacturing & deploying our ¼ scale prototype.” 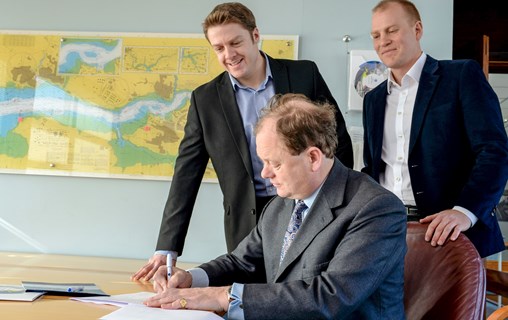