The ability of Welsh ports to deliver prosperity for all was highlighted this week to Welsh Government, Assembly Members, councillors and key business leaders at a reception in the Senedd, Cardiff.

Assembly Member for Preseli Pembrokeshire, Paul Davies, hosted the event on Tuesday 7th March at the National Assembly for Wales enabling the Port of Milford Haven, Pembrokeshire County Council and other partners on the Milford Haven Waterway to showcase the vibrant economic cluster that exists around Wales’ largest port.

Attendees heard that, as an island nation with 95% of goods being traded in and out of our ports, it is important for the sector to be prioritised. By ensuring the right conditions are in place to foster new trading relationships and manufacturing-led growth in the future, Wales can strengthen its economy. Attendees were struck by the significance and scale of the supply chain that ports sustain, providing jobs in surrounding communities - a fact that is often overlooked.

The Port of Milford Haven supports 5,000 Welsh jobs and is Wales’ largest port. It is home to five major marine terminals as well as one of Europe’s largest and most efficient power plants. Valero’s refinery accounts for around 10% of Wales’ exports and is worth approximately £55m per annum to the Welsh economy. Combined, the two liquefied natural gas terminals at the port, South Hook LNG and Dragon LNG, are capable of supplying up to 30% of the UK’s natural gas demand.

“With the UK government about to trigger Article 50, now is the time to consider the strengths and opportunities Wales has in its ports,” said Alec Don, Chief Executive at the Port of Milford Haven.

“As a nation bordered on three sides by the sea, we urge the Welsh Government to recognise the value locked in its ports and support us in creating an attractive environment for businesses, large and small, within 'port zones'; an environment which makes it easy to invest, easy to operate and easy to employ.”

“Ports create jobs, drive economic growth, attract investment and create opportunities for all of Wales, not just the immediate communities they serve,” continued Alec. “They are a natural location for logistics, manufacturing and export businesses and are vital arteries of international commerce.”

The reception event unveiled two major projects which the Port of Milford Haven are progressing.

‘Pembroke Dock Marine’ forms part of the Swansea Bay City Deal bid and seeks to create a world class centre for marine energy development, fabrication, testing and deployment at Pembroke Dock, in Pembrokeshire. The Port of Milford Haven has partnered with Marine Energy Wales, ORE Catapult and Wave Hub and is working alongside Swansea University and Pembrokeshire College. Together they are poised to drive innovation and herald the commercialisation of wave and tidal stream technology in Wales which would make a vital contribution to Wales’ blue and green economy; increasing Welsh productivity, export potential and skilled employment opportunities for today and for future generations.

On the other side of the Waterway, in Milford Haven, the ‘Milford Waterfront’ development is well underway. By creating additional all-weather leisure and retail space around its existing vibrant and popular marina, Milford Waterfront is set to unlock tourism opportunities and become one of Pembrokeshire’s hottest new destinations. The successful delivery of this exciting development will create over 600 new jobs and deliver £19m of GVA per annum to the Welsh economy.

Paul Davies, AM for Preseli Pembrokeshire, said: "The Port of Milford Haven is a national asset and a growing centre for the blue and green economy. The businesses along the Haven Waterway have a strong engineering and tourism pedigree, and the two flagship projects - 'Pembroke Dock Marine' and 'Milford Waterfront' - will help secure those vital skills and jobs in the future."

In his closing remarks Alec Don said: “These projects are just two examples of how ports can help position Wales as a world facing nation to secure a bright, more prosperous future for Welsh people.” 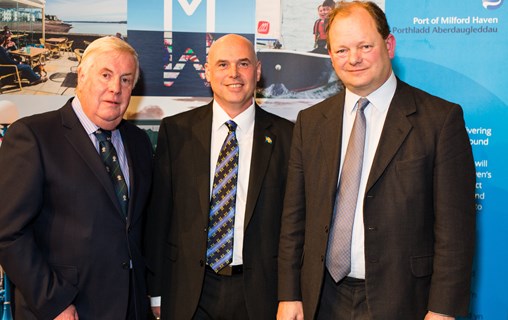